by Give It To Me Rusty 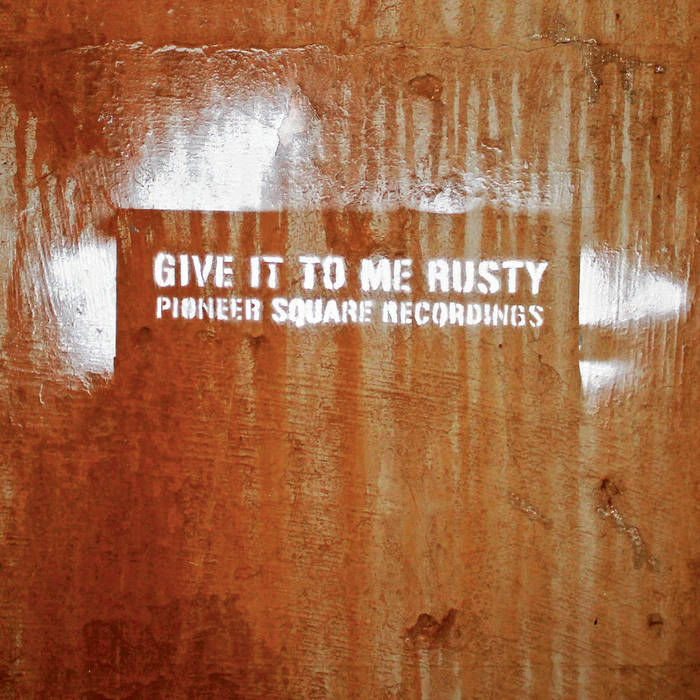 Give It To Me Rusty is a musical collaboration between Seattle’s downtown homeless population and musicians Aaron Zig and Noah Dassel. Often compared to Simon & Garfunkel and Johnny Cash, with a cultural equity aim akin to folklorist Alan Lomax, their lyrics are constructed word-for-word from face-to-face conversations with those living on the streets of downtown Seattle. To quote Seattle Mayor Mike McGinn: “Give It To Me Rusty’s songs capture the strength, resilience and heart of Seattle's homeless population. Their mission reminds us of the importance of sharing our stories and the belief that we can pull each other up, one person at a time, through the simple act of listening."

Pioneer Square Recordings is the culmination of a project that happened spontaneously while busking in 2008. Dean, a traveling Vietnam War veteran, began improvising words over Zig and Dassel’s music. They sang along, turned on Noah’s handheld recorder, and created their first song: “Give It To Me Rusty”. This phrase was chosen to be the band's namesake because it embodies the artists' belief in sharing one's truth in all it's real, raw, "rustiness". As they continued to speak with the homeless, they recognized the need to share these stories with a larger audience. They found music to be the common language they could use to make this possible. The mission of Give It To Me Rusty is to break down the stigma of homelessness by personalizing the people behind the stereotype. These are tales of family and love, of addiction and loss, of hardship and redemption. The stories speak to the endurance of the human spirit despite tremendous odds. Out of respect for their participants' privacy, Zig and Dassel always ask permission before adapting their words to song. No words or phrases are altered during the song editing process.

Pioneer Square Recordings, the studio album, was born in late 2010 when Give It To Me Rusty launched a successful Kickstarter fundraising campaign that underwrote the costs of recording at Avast Studios. What began as a guitar and vocal duo expanded into a six-piece band. With the intention of capturing a live, “band-in-the-room” feel, the basic tracks were recorded in two marathon days. The result is a journey through the streets of Seattle; and thus the American experience at large. Montana farm girls, Mexican handball players, South African child soldiers and New York train tramps traveling through the Southwest are among the people represented. Their diverse stories are poignant, heart-breaking, often humorous, and ultimately, very human.

Music was the equalizing force that allowed Give It To Me Rusty to connect with a group of people they had scarcely encountered before. They hope Pioneer Square Recordings allows the listener to do the same.

Give It To Me Rusty Seattle, Washington

Give It To Me Rusty is a musical collaboration between Seattle’s downtown homeless and musicians Aaron Zig and Noah Dassel.  All of our lyrics are constructed word-for-word from direct conversations with those living on the streets. Our mission is to break down the stigma of homelessness by personalizing the people behind the words. ... more

Bandcamp Daily  your guide to the world of Bandcamp